This year’s Autumn Statement was something of a mixed bag to say the least, delighting some and entirely displeasing others. But then again, this tends to be exactly the case every single time the Chancellor opens his mouth – the general fallout of the 2015 Autumn Statement being somewhat modest compared to those of years gone by.

Nevertheless, one large and rapidly growing group of British investors is unlikely to be particularly happy with one of the major changes outlined last week. For those who invest in properties for the purposes of letting out to tenants, higher stamp duty is on its way. And it’s not only buy-to-let landlords who are about to find their tax bills increasing significantly, as those buying second homes for any purpose will likewise be liable for higher stamp duty contributions, the Chancellor confirmed.

The changes are to be rolled out as of the Budget in April next year, after which time an additional 3% surcharge will be added to each stamp duty band and from then on applied to second properties across both England and Wales. As far as George Osbourne is concerned, the fact that this will staff an extra £1 billion in the Treasury’s coffers by the year 2021 is justification enough for the hike.

Unsurprisingly, landlords and property sellers in relatively enormous numbers reacted with anything but positivity to the announcement. As far as the country’s buy-to-let community is concerned, the move will do little other than dilute interest in second-property investment, which in turn will in its own right have a negative impact on the industry, the economy and the amount of stamp duty paid.

Still, the Chancellor did at least make it clear that this was yet another initiative geared towards increasing taxation for wealthier individuals and giving lower earners something of a break. This was clarified by the announcement of an extension of the Help to Buy scheme in London, along with heftier investment in the Gov’s Starter Homes programme.

But back to those looking at additional expenses as of next April, the long and short of it is that buy-to-let landlords will be looking at additional stamp duty outgoings at an average of £5,520 per property. Where properties have a value between £125,000 and £250,000, current stamp duty is 2% and will as of next spring be increased to 5%. Assuming that the current £184,000 average buying price of buy-to-let properties remains similar until then, this will mean an additional £5,520 in stamp duty payable.

On the plus side…silver linings and all that…those with property portfolios in excess of 15 buy-to-let properties will be exempt from the rule, continuing to pay stamp duty at the current rate.

Here’s a quick overview of the stamp duty hikes on buy-to-let homes, which will come into effect next April: 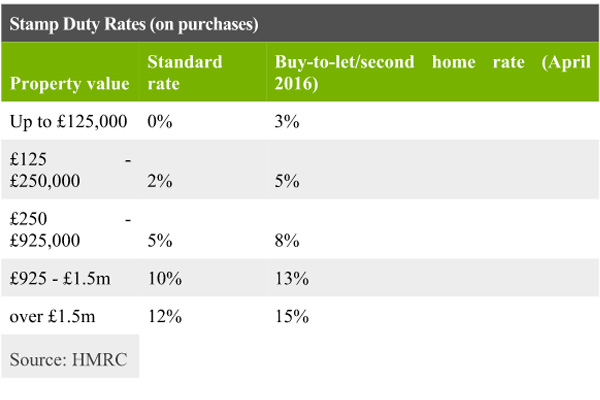